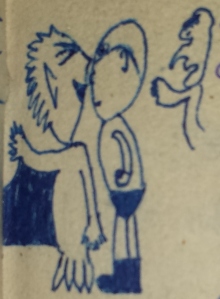 Good Super Dave came here to save
The world from Dastardly Dan
He flew from far west, the wind at his chest
Since he’s not your average man

But he soon hit a trap set by that evil chap
An invisible wall in the sky!
But there was no way that would stop him today
He found a small hole to get by

There were more, more, and more of these traps to endure
But Super Dave didn’t turn back
Each challenge he faced, a fear was erased
And a new skill set placed in his pack

At long last our hero reached Citadel Zero,
The hideout of Dastardly Dan
After a chase, they stood face-to-face
But Dave didn’t see Sinister Stan

Stan swung a fist, but Dave ducked and Stan missed
It hit Dastardly Dan in the jaw!
Dave took down Stan, then tied him to Dan
Our hero prevailed through it all!

Dave took some rest, exhaled from his chest
But he knew that it wouldn’t last long
Though he won against Dan and his poor minion Stan,
Evil Evan was still doing wrong